I spent the last several days in D.C. at the annual convention of the Association for Psychological Science (APS), along with Wikipedian Piotrus and Wikipedia researchers Rosta Farzan and Bob Kraut, talking to psychology researchers about Wikipedia. We probably talked with 200 people, and almost everyone we talked with was supportive of–if not downright enthusiastic about–trying to improve Wikipedia’s psychology coverage.

Several months ago, with the vocal support of APS President Mahzarin Banaji, the APS launched their “Wikipedia Initiative” to get psychologists into editing Wikipedia. So far, the main thrust has been their APS-WI portal, which aims to give newcomers a clear way into Wikipedia and point them toward articles in their area of interest that need work–and at the same time, systematically test different approaches to getting people involved.

Before the convention, the APS Wikipedia Initiative had recruited 263 psychologists.  68 of them had started editing, with over 400 different articles edited among them. (Now 13 more have signed up, and 10 more have started editing.)

I had the opportunity to give a short presentation to the APS board before their convention started, in which I shared a bit of what we know about the barriers to expert participation in Wikipedia more broadly and then gave an overview of the Wikipedia Ambassador Program for helping professors run Wikipedia editing assignments in their classes.  The reaction among board members was really encouraging… and that evening, Professor Banaji spent a few minutes at the beginning of the official opening of the convention exhorting APS members to get involved with Wikipedia. (She even mentioned me!) 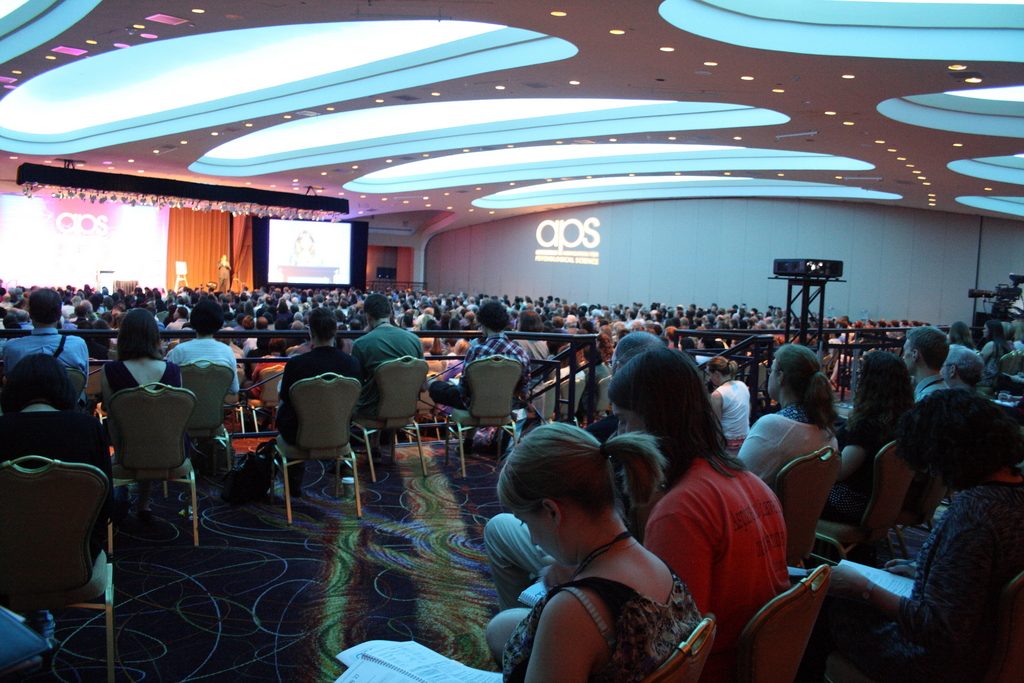 Banaji’s enthusiasm for Wikipedia comes across clearly in a recent podcast about the APS Wikipedia Initiative. For the two main days of the convention, that enthusiasm seemed to carry over to the many psychologists who stopped by the lavish Wikipedia booth APS had set up.  We also did five Wikipedia demos–often with conversations about Wikipedia going on at the same time with whoever stayed behind at the booth.  I came back with a list of 42 instructors potentially interested in working with the ambassador program and doing Wikipedia assignments.  That, of course, has been my focus for the last year… until now, limited mainly to supporting classes on public policy. Our Education Portal is active now, with a broad range of support materials and advice for anyone assigning Wikipedia to their students.  (The sample syllabus, in particular, is something the psychology professors responded very positively to.)

It seems that Wikipedia in the classroom is where APS is converging now, too. The Wikipedia Initiative team will soon be working with an intern assigned to develop tools to help instructors evaluate their students’ contributions, which will hopefully produce something broadly useful for anyone running Wikipedia assignments.

I’m optimistic that we’ll see a wave of additional professional societies getting behind Wikipedia, especially if as many psychologists set their students on Wikipedia as I now expect. You can’t buy the kind of improvement in public representations of psychology that 50 classes of students editing Wikipedia would bring.

4,398 thoughts on “Wikipedia and the psychologists”