Does anyone one else suspect that europeangoldfinch.net is the portal into a Prison Break related alternate reality game? It’s a seemingly fake forum, supposedly about the European Goldfinch, but the comments are unrealistic and there isn’t actually a way to sign in, post, or anything else.

Maybe it will become active later in the season, when the characters actually begin using it on the show.

About a year ago, I dug up a skinny maple sapling, stuck it in a flower pot, and decided to learn the art of bonsai. Since then I’ve dug up a lot of other small trees and shrubs, killed a fair number of them, bought some others from places like home depot, and spent a lot of time taking flak from my family (especially Faith) about what a lame hobby I have.

Since we moved to West Hartford a few months ago, I’ve gone to several events with the Greater Hartford Bonsai Society, and it’s been really great. They had their annual bonsai show recently, and I showed one of my plants, a sagebrush I dug up in Reno over Christmas. I also traded away the other two surviving sagebrush for plants from other people.

You can see some pictures from the show, and other excerpts from by adventures in bonsai, in my flickr set, Miscellaneous Lifeforms.

We got a new kitten, Halley, last week: 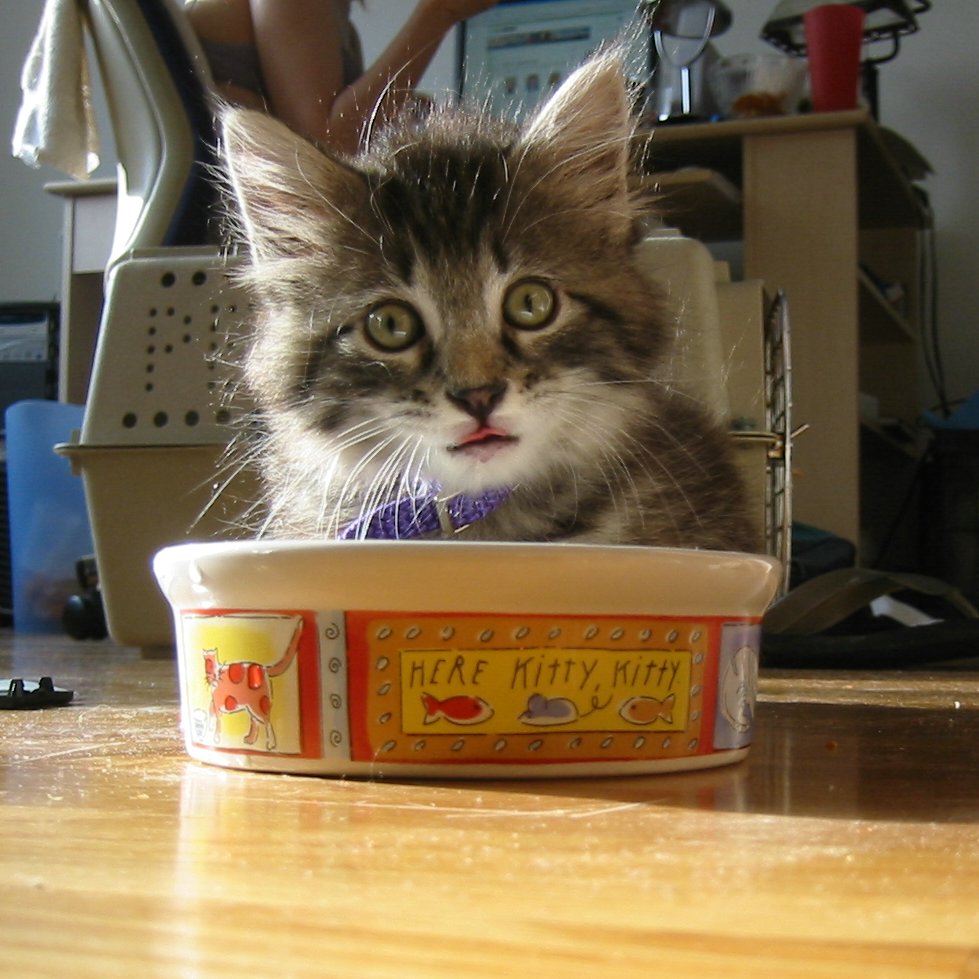 And Melinda’s wedding was a great success; all the assorted parts of the family behaved and got along well, and it was beautiful. My dad let me use his camera for some shots; it has a great telephoto lens and made me want to get serious about photography. You can see some of the results on flickr. Unfortunately, I probably won’t be able to get a nice camera for a while, but it’s something to look forward to.

Reading: The System of the World

UPDATE: This picture of Halley has been making the rounds on the internets; it even found its way, randomly, onto a video podcast called “Ask Mind Candy“.

My sister Melinda is getting married on Friday. Tomorrow morning we’re driving up to Hanover (again, since she graduated from Dartmouth last weekend).

Faith and I live in West Hartford. Lots of other stuff has happened that maybe I’ll write about later.

I’ve been in Reno visiting my dad and his family since the beginning of last week. Hanging out with the kids is fun (I posted some pictures of them on Flickr, along with some miscellaneous photos), and I dug up some sagebrush for bonsai, too.

Dad’s website is finally is half-way decent shape, and I convinced him to start a blog, too: Renotes. I don’t know how much he’ll use it, but he’s still enthusiastic at this point. I also set him up with a myspace page, so he can develop a 15-year-old fanbase (and so he has free hosting for a couple songs).

Even though dad’s dogs are really a bunch of bad dogs (Aria and Basie are actually good dogs, but as a group, they’re all bad), it’s nice having them around. I’m looking forward to when Faith and I can get a dog, once we live somewhere stable.

I miss Faith and Curie and Tesla and Euler and Poisson and d’Alembert and the rest, though.

I decided a little while ago that I would try to start eating fish; inspired by Laura’s rareness enthusiasm, I figured I’d start with raw fish. I got some tuna and salmon sushi from the Whole Foods we found in Hartford. It actually wasn’t bad. I’m sure some of my friends will be proud.

I was cleaning up my room and hanging up all the pearl snap shirts that littered the floor, and I thought of high school. Actually, I thought of reminiscing about high school in college, but whatever. What I thought of was how I used to wear 2 and sometimes 3 button-up shirst together; usually a short-sleeve and a flannel. So I put on 8 of my best shirts and took a few pictures.

In other news, raw honey. It’s the best foodstuff ever, except for cinnamon raisin cookies from Trader Joe’s. If you’ve never had it, go buy some.

Wikipedia is 5 years old , and in a month or two it will have 1,000,000 articles. It was also the 19th most visited site on the internet over the last week, and has been rising steadily. Hooray!

According to wordcount.org, Lizzie (Faith’s nickname from when her name was Elizabeth) and Sage are only four words apart among the 86,000 most-used English words. How weird is that?

That was the best comment I’ve heard out the mouth of a sports announcer all season. Our players in the Holiday Bowl keep getting hurt, but Stoops says there’s no injuries at half-time. We come out after the half, and that seems to be true. Sooner Magic, baby!

Faith and I watched Sideways today; I don’t recommend it. There is one great moment, and it’s in the previews (it’s line about Merlot). Other than that it’s sort of slow-moving, and none of the characters are interesting.

Pointing links at popular websites to attract Blogger Web Comments extension users brought moderate returns. Actually, just one link. For some reason, the only link where my post showed up through the new Firefox extension was the (personalized) Google homepage. I linked to a ton of other sites in that post, some of which I also mentioned by name, but only the first went into effect. Google seems to have put in safeguards to prevent just the kind of abuse I was attempting.

My post was the most recent listed for the Google homepage for about 8 hours (in the middle of the US night) and produced about 40 unique hits. Not overwhelming, but not insignificant. (I think I got about 25 cents in ad revenue, so it’s definitely something that could be exploited for evil). If all the links had worked, it would have been many times that. I may try a more controlled test, with short separate posts linking to popular (but probably not too blogged about) pages. Of course, the results were high partly because lots of people were testing out a new product and saw a blurb mentioning that very product, so the game would get old fast if spammers tried to take advantage of it.

However, other sites are reporting that just such abuse is occurring already, with a wide variety of spam. Fortunately, the most interesting and unknown a site, the more likely you are to check out the comments and the less likely it is to be spam-linked. But it still dilutes the value of the extension.

I just got to Dallas to spend a few days with Faith’s family, after a week in Yukon with mine. We did a lot of hanging out watching 24, and Melinda and I went to the annual Wasielewski/Adams Christmas party; always a great time. I think I’d like to have an N64 with 4 controllers, just to player Dr. Mario; it’s really the best party game ever. It’s a shame that Yale and Houston and Oklahoma aren’t all in Southern California… my friends are scattered across the whole country.

It’s been nice to be home and get a chance to relax (even though I still have a paper to write).

Santa was good to me this year. I got a slew of CDs, some pajama pants, the extended edition of Sin City (it’s awesome to read through the graphic novel while watching the movie; every scene is filmed exactly like a frame from the original and all the dialogue is verbatim), a couple books, and my mom is ordering me a set of equipment for home beer brewing!

Faith and I saw Chronicles of Narnia just before we left; it was pretty good but not great. The casting of the Pevensies was underwhelming, and Aslan wasn’t as impressive as he should have been.

My sister Melinda has now been accepted to the Dartmouth and OU med schools, and she’s still waiting to hear from UConn. We’re hoping she gets into UConn, because that way me might be able to get a house near Farmington and share it with her and her husband-to-be Zack.