We’re mostly moved in to the new apartment now… the TV and the speakers and hooked up, and most of my books are back on the bookshelves. We even moved the piano into the apartment by ourselves; I just backed the truck right up our grassy hill to the front door and sent the ramp into the living room.

We had to move the cats in a dog cage that had presumably been used by dogs (my friend Lloyd found it in his basement and gave it to us), and they were hissing and meowing for the entirety of the trip. When we arrived, I let them out for a bit, and they seemed OK… they went exploring the new apartment. But I had to put them back into the cage for about 20 minutes until we had the litter box set up, and they really resented that, especially Curie. She found this spot in a dark closet and didn’t leave voluntarily for about 24 hours. But now both of them are back to normal.

Even though this apartment is a little smaller, it is laid out much better and seems bigger. And, we have a garage of basically equal size to the apartment, plus a huge balcony. And there is a Super Walmart nearby, unlike New Haven, where all the nearby Walmarts closed at like 9 and had no food.

Here is Tesla just before the move, hopped up on catnip. 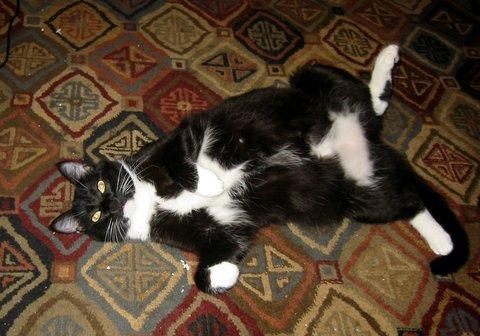