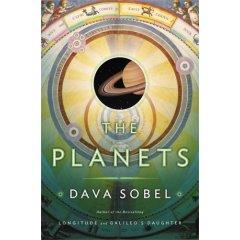 I finally finished writing my review of Dava Sobel‘s forthcoming The Planets. I had about half a review written before my computer crashed, but of course it’s better the second time anyway. Here is the only other pre-release review I’ve found so far; apparently Dr. Bortz is less impressed than me.
Here’s mine:

Dava Sobel‘s newest offering deviates from the historical path of her previous work, but the stellar prose that remains in The Planets will inevitably pull in any who wander too close. This book touches on the social, religious and intellectual aspects of the solar system from antiquity to January 2005, but cannot properly be called history; Sobel simply stuffs the most interesting stories and facts about each celestial body into a slim 231 pages (plus a glossary and a brief appendix of factual details). Of course, interesting stories and facts about the planets could easily fill a book many, many times as long. The beauty of The Planets is that Sobel (who has clearly culled from an enormous pool of potential content) selected only most fascinating and unusual to include. Few but historians of planetary astronomy and the most dedicated trivia buffs are likely to be bored by too much they already know, even though nearly everything comes from published sources. And even if the contents are old news, Sobel’s packaging is a joy.

The Planets is organized into thematic chapters that, for the most part, read like separate essays. The introduction and conclusion give the context for Sobel’s longtime and continuing passion for the Planets; the former is not particularly riveting, but does not detract. The chapters—there are ten including the Sun and the Moon, with Uranus and Neptune sharing one—bear titles indicating the overarching theme of each, though each theme is stretched far enough to allow a feeling of continuity as the book proceeds outward from the Sun to the edge of the solar system.

Beginning appropriately with “Genesis,” Sobel’s Sun chapter is perhaps the least novel (as well as the shortest). Sobel gives an overview of basic facts and trivia about the Sun, while beginning and ending with invocations of creation and drawing a few parallels between the scientific and religious stories. Mercury’s “Mythology” has the easiest theme (mostly Greek, though it dabbles in other cultures), but Sobel makes it interesting by telling the scientific history of the planet through anecdotes of scientists applying the same mythological themes to their work. The integration of science and culture is even smoother in Venus’ chapter, simply themed “Beauty;” highlights include poetry on Venus by scientists and literary figures alike (and what sophisticated history of science is complete without a William Blake reference?). Our own pale blue dot offers a change of pace; Sobel tromps through a brief history of the developments of Earth’s “Geography,” dispelling a number of common historical myths in the process. “Lunacy” vaguely revolves around Moon superstitions but is mostly filled with interesting facts.

One of The Planets‘ best chapters is “Sci-Fi,” which is told entirely from the perspective of a 4.5 billion year old Martian rock that crashed into Antarctica sixteen million years ago. The rock tells its own story and that of Mars, explaining how its home planet has been the object of such fascination among Earth natives through science fiction. Jupiter has the honor—or shame, depending on one’s perspective—of bearing the theme of “Astrology.” Given it’s role in the careers of Galileo, Kepler and so many other early astronomers, historians of science should appreciate Sobel’s choice for the king of the planets, despite whatever offense contemporary astronomers may take. Saturn’s “Music of the Spheres” addresses the numerological aspects of the history of planetary astronomy, opening with a discussion of Gustav Holst and interspersed with other musical references. Uranus and Neptune share “Night Air,” which tells their stories of discoveries mostly through the eloquent correspondence of 19th-century American astronomer Maria Mitchell. “UFO” is nominally Pluto’s chapter, but as the name suggest, Pluto is odd planet (if it can even be considered one) out, more similar to other recently discovered Kuiper Belt objects than its traditional brethren. Discussion of such discoveries segues into the conclusion, which brings planetary astronomy up to the ongoing investigation of Saturn and its moon Titan.

General readers will take a lot from this book: a head full of scientific knowledge about the planets, details and anecdotes about how that knowledge was produced, and an appreciation for their historical cultural significance as well. But the greatest gift Sobel grants the reader is a small piece of her enthusiasm; The Planets makes you want to, if not become an astronomer, at least do more reading on the subject.

[UPDATE: 10/3/05] Here are some other reveiws that have come out recently:
Sunday Times (UK)
Guardian Unlimited Books

14 thoughts on “Review of The Planets, by Dava Sobel”