After Aaron Swartz died by suicide in January, and in the months since then as issues of internet freedom and his own tragic story have continued to make news, there’s been a lot of demand for photos of Aaron. I had three photos of him up on Flickr and Wikimedia Commons, from a 2009 Wikipedia meetup.

(I went back to my archives and found several more from that meetup.)

When I got contacted by photo editors who wanted to use these photos, I tried to get them to follow the terms of the CC-BY-SA license. In two cases, Rolling Stone and New Republic, I got a chance to explain how to use a Creative Commons license in print. For most photo editors, free licenses are a big unknown, but lately (in my anecdotal experience) they’ve been more willing to use and follow the licenses than in years past. Here are the spreads.

I’ve tried to follow how these photos have been used online, as well, to understand how–and how well–freely licensed images are used by news websites. Of the 42  uses I’ve looked at there are:

Probably the most interesting use is this mixed media derivative (unattributed, and with no free licensing that I can tell) from a Hungarian website. If anyone knows the language and wants to try to get them to release it under a free license, please do.

The time.com writer put me in touch with their photo editor, who sent me a screenshot from the Landov website, showing how my photo appears in the photo licensing database. 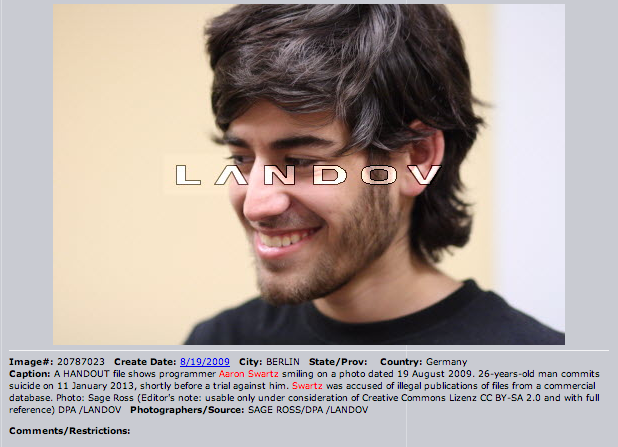 The last part of the Caption section reads:

But the Comments/Restrictions section is blank, and the Photographers/Source line that news orgs would typically use just says SAGE ROSS/DPA/LANDOV. So basically they are charging news organizations for this photo and hiding away the fact that it’s not their photo to license in the normal way, and that if their customers want to use it, they actually have to follow the same rules as everyone who gets it for free from the original source.

9 thoughts on “the use of Aaron Swartz photographs”